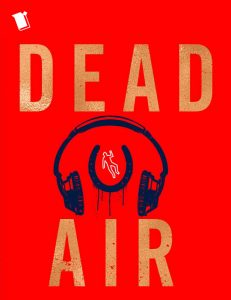 Welcome to Dead Air, where M is for midnight, Mackenzie… and murder.

Mackenzie Walker wasn’t planning on using her college radio show to solve a decades-old murder, but when she receives an anonymous tip that the wrong man may have taken the fall, she can’t resist digging deeper.– This is how Serial Box opens the storyline to Dead Air by authors- Gwenda Bond, Rachel Caine, and Carrie Ryan. I’m a huge Rachel Caine fan- as in I have many of her books and she releases a book, I probably have it within a month of release. Somehow, I missed this when it got released. WTH was I thinking?! Having these three ladies together is basically having the chills on speed dial.

The concept- having a college student who uses her time at the local college radio to help feed her journalism project, a cold case, to better recognition and perhaps figure out if the jury came to the correct conclusion or not. What Mackenzie doesn’t realise is this- there are people in the horse world who will do ANYTHING to keep her quiet, from making her lose her job to hurting her, or worse. From the day Mackenzie starts playing the old recorded 911 call on the midnight radio show through putting her story out by podcast, many things come to light- not all of them flattering to others involved, not all helpful to the case Mackenzie is building- that Brandon McDonal, who was convicted of killing a glamorous heiress of a Kentucky racing dynasty, could be innocent. Yet, Mackenzie doesn’t let fear stop her, though at times, she does pull back, trying to figure out where the line between self preservation and doing justice resides.

This story had chills, had some slow moments, and honestly, felt real. I think that was the part that got to me most. It felt like something I’d do and probably pay the price for doing. I’d be that person- look into a cold case(I am a true crime junky in many ways, ask my family. LOL) and really see if the person convicted did it or if there was no one found, try to see who was guilty. We all want to make a difference in some way, so it means something to us that we bring closure and justice for those no longer there and to those who live without their loved ones. For this story, it really dug deep within the human side as it tilted into the glamorous world of horse racing while also keeping that human every day element. The scary bits were the things that got to you- the fear aspects of being watched, things going wrong, and others that I’ll leave to you to discover yourself. But realise- it’s those things which hone in our personal fears and elevate them even more.

The narrator does such a great job giving us not just the embodiment of Mackenzie, but the others involved in the story. You find yourself rooting for her as each noise, each sound, each breath makes you more uncomfortable, agitated, uneasy. You want to hurry up and finish the case, but you also want it done right. The helpful hints from the armchair detectives in the series are us–and we want to be right, we want to help Mackenzie, but we also don’t want to get hurt. This story has to be heard to be enjoyed. Take your time, listen to it, relisten to it and prepared for an ending unlike you think. Let’s just say that, though I’m very good at guessing most mysteries, this one had me guessing until the end. What an ending it is, too!

So give yourself the gift of an audiobook series– go to Serial Box today and pick up Dead Air. You won’t regret one moment of it.