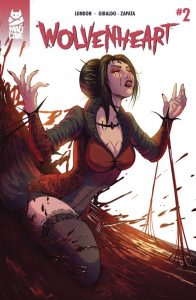 Let’s talk about the Mad Cave Studio’s series, Wolvenheart. This series takes place somewhere in the late 1800s, mostly, and somewhat in the United Kingdom. I say somewhat because like all good time traveling stories, you end up traversing far away only to return to where you start…at least so far. So you know, this series, unlike many other great Mad Cave Studio series, will be comprised of seven issues instead of the traditional five. I admit- from what I’ve been reading- it’s going to take at least seven to get anywhere near a resolution of sorts.

So in issue two, we meet Elizabeth. She is—a big bad and she’s up to no good. In fact, you realise that as Sterling Cross tries to convince Queen Victoria to not do away with the Wolvenheart, that Elizabeth has confounded Victoria and seduced her into believing things she shouldn’t. When Sterling and Elizabeth face off, it’s only then you learn she is someone who not only knows Van Helsing, but is a powerhouse in her own right- Countess Elizabeth Bathory. Now, be warned- we also briefly meet Dorian Gray. Yes, that Dorian Gray, and he’s still very much a good looking arse.

Then you find out the dimension keys play a pivotal role in what Elizabeth plans along with Tesla, yes, the great Nikola Tesla. When Sterling is sent into the void, they say the only thing that can bring him back to a time period is a dimension key. However, Sterling does emerge in the UK again, only this time, it’s twenty years later and the emerged from the void due to a woman named Kesia. 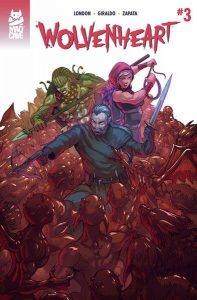 Issue three starts with Sterling learning more about himself, his past, and the truth- Van Helsing is dead. You learn some life lessons like- Know your history- as it could one day save your life. This amused me more than most life lesson moral moments. This one actually had bite to it. (Pun intended!) You learn more about the specters that Tesla and Elizabeth mentioned in the last issue. But the interesting thing is not just that Sterling himself is part wolf, but that Van Helsing has taken him to learn control. You learn the story of how Wolvenheart formed and it’s a doozy for the ages. But the ending—Sterling must find a dimension key and Kesia rouses herself to give him information on where to find it.

Issue four starts with a startling fact- Nikola Tesla is a traitor to Wolvenheart. Once there as a member, we discover that Van Helsing suspected him and has now confronted him directly. Yet, a misdirection stops the Wolvenheart group from taking Tesla prisoner- and seals their own doom. When we check in with Sterling, Sabina, and Kesia- we find them searching for someone with one of the dimension keys. Queen Victoria is still waiting for Elizabeth to bring back her husband, Prince Albert. I’m not going to spoil what happens between Elizabeth, Victoria, Dorian, and Tesla, but suffice to say- I was like, “Noooo…that’s just shades of a certain doctor!”

Then the issue ends when we find Bengal at a monastery preparing for a special bullfight. He won’t help Sterling until Sabin 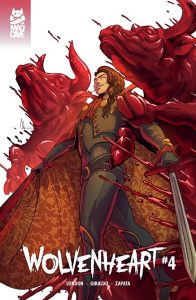 a challenges Bengal, calling him an “arrogant fool.” Bengal says he’ll help but only if Sterling defeats Bengal’s bull. Sabina says it’ll be no problem, but then again, Sabina has no idea on what makes Bengal and his bulls different from any other out there.

So ends our recap of issues two through four. So you know, the artwork throughout the series is phenomenal. Alejandro Giraldo has done fabulous work that really brings this world to life in a way that is both dark, creepy, yet remarkably triumphant. Miguel Angel Zapata gets full marks for his outstanding lettering. Truly, this lettering makes the comics fly by as you read and absorb. Great letterers make it easy to follow the storyline and take in the artwork and sounds. Miguel makes it not just easy, he makes it a delight! Now, let’s talk about Mark London for a moment. He’s a tremendous writer and getting to read his stories is always a joy. But there is something about this storyline that really brings things up to another level of storytelling for Mark. This writing is the type you absorb the story, you inhale it, you become one with it. Mark has made this story come alive within itself and within the readers- and that means a lot.

So, if you’ve not grabbed your copies from your local comic store, you need to go grab them from MadCaveStudios.com or you can even get them digitally from Comixology.com. Don’t hesitate to indulge in this world of brutality, darkness, light, and duality.