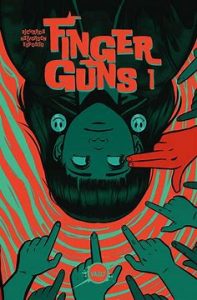 This story is about emotion, coming to grips with it, the way it can flood your system…and that sometimes pictures can tell the story that words just can’t. This new series from Vault Comics is called Finger Guns and to be honest, at first, I laughed at the concept. But after talking to Justin Richards about the storyline and reading the first issue- I’m not laughing, I’m nodding my head because I remember. I remember what Wes is going through- wanting people to feel as angry as he does when his father doesn’t come home for dinner, but instead leaves money for him to fend for himself.

When Wes discovers he has the power of using the double finger gun to invoke negative emotions in others, he does what any one of us would do- use it. Indiscriminately. It reminds me of the Jedi meme, “If I was a Jedi, there’s a 100% change I would use the Force inappropriately.” Wes sets off people into arguments, even a puppy. As they get angrier, he becomes less so 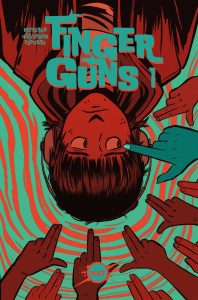 When he meets Sadie, a fellow Finger Gun user, it’s because she counters his Dark Side with her Light Side. You realise there is more to these kids, more to their lives than just this ability. They even have different ways they look at things and it’s a great thing to see. Neither is worried about the other not thinking their way, just that they can be open about their thoughts. As the first issue ends, you get to see more on why having the Finger Guns for these two really hits the heart, hits the soul, and why you’re cheering for them, even as you feel as if you’re reliving some of your worst moments. 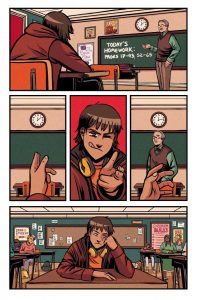 Let’s talk colours, the art, lettering and even the editing in Finger Guns. First things first—the colour POPS off the pages. You really slide into this journey feeling part of it due to the colouring from page one. Bold and bright in some areas, rich and dark in others- it makes for a cohesive whole where you feel that emotion within each panel, within each page. There’s an overlay of emotion that showcases itself with colour and here it’s amazing. Now, that said—let’s talk on how those colours emphasize the fabulous art. Wes really stands as this unique yet all around kid any of us can identify with. His demeanor is captured in defining strokes, great use of colour and shading. Same with Sadie- she lives with great colour and with fabulous drawing of not just looks, but the way she holds herself. You recognize her and it’s fabulous! The lettering here is truly on point for this story. It flows simple and yet in such a way, you’re not aware of being guided. Great lettering like this makes you want to read more, but more than that—the lettering is used judiciously. Which means we need to give major kudos to Adrian Wassel as editor. His editing skill here is truly topnotch. Though editing is never obvious, great editing helps you to realise just how important those wordless panels are and the impact the words immediately after have. His skill in this format have increased with every book he’s done and having his touch here elevates this great storyline even more. 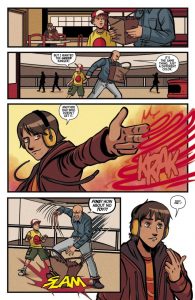 So, how do I feel about this young adult story which touches all ages? It’s one of those secret wishes we had when we were young…what if I could… That dream moment, where a simple finger gun can change someone’s moment, give them clarity, give them the anger to change, give them a chance to step back and adjust and it means the world. This series is going to be a keeper. It’ll be one you’ll recommend to family and friends not just now, but always. Thus, get yourself ready for Finger Guns. It’s so worth waiting for.